Entrepreneurship, the second time around

The history of KL-Lämpö dates back to 1993. The founder of the company was Jonne Hakala, who had spent his life as an entrepreneur and who had also accumulated extensive expertise in the water-treatment industry. He had previously been the founder of one of Finland’s leading water treatment businesses in the late 1960s and had served as its managing director for two decades.

Jonne sold this company in the late 1980s with plans to retire. However, the new owner did not succeed, and the company went bankrupt. At this stage, Jonne realised that he missed work and that it wasn’t time to retire just yet.

He developed a new concept and product portfolio and surrounded himself with like-minded experts. A new company was established and named Suomen KL-Lämpö Oy (the word “Suomen”, meaning “Finland’s”, was later omitted from the company’s name).

KL-Lämpö’s mission was to deliver expert services and products in the field of water treatment, and to outperform any other company. Jonne’s old clients valued Jonne’s dedication and his customer-oriented approach of adapting to their needs. KL-Lämpö was able to successfully solve customers’ problems and even though the company faced severe competition, it managed to earn an expanding share of the market.

Jonne Hakala, the founder of KL-Lämpö Oy and Lämpöaalto Oy. Jonne was one of Finland’s leading water treatment experts. 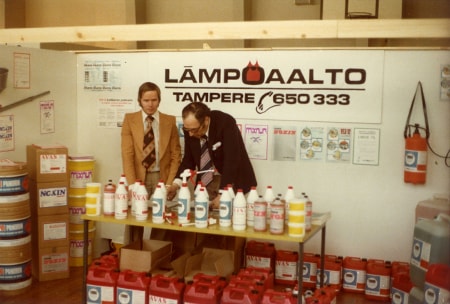 During the 1970s, the exhibition style at trade fairs was more product-oriented than today. 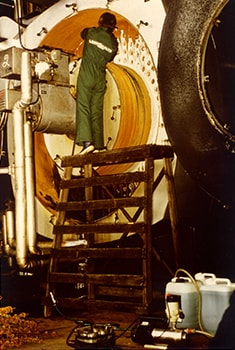 In the 1980s, the cleaning of oil-fired boilers formed an important part of the company’s services.

Water treatment is primarily about chemistry – especially personal chemistry. Jonne had been in the water treatment business for over 30 years, and clients trusted him. At KL-Lämpö, service skills were considered as important as the product. With excellent customer service and products, the company was able to solve client problems and gain and consolidate client trust.

KL-Lämpö’s customer service has always concentrated on ensuring the quality of the service and the product. The company developed its own quality management system and this was in place for many years, until 2014, when it was updated to meet the ISO 9001 standard.

Today, the quality management system acts as a guideline for each employee at KL-Lämpö and ensures reliability, uniformity and transparency in all aspects of the business.

The staff at KL-Lämpö always look beyond the surface of things. This photo is from a street heating project in Tampere, Finland. 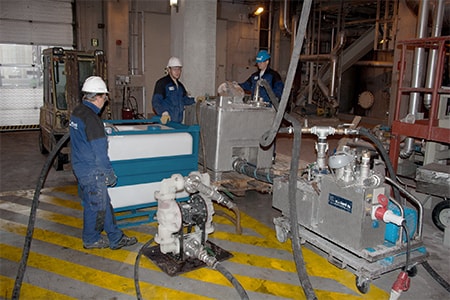 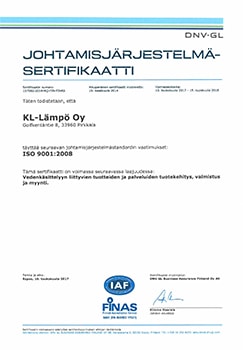 The change in ownership written in the stars

In 2002, at the age of 67, Jonne Hakala decided to retire. It seems KL-Lämpö was born under lucky stars because Jonne’s former employee, Pentti Edgren, expressed his interest in buying the company. And so the deal went through. As a result, KL-Lämpö remained a family-owned company when its ownership shifted to Pentti and his three sons.

In his previous career, Pentti had established an extensive network of customers who maintained lasting relationships to his firm. He also had the advantage of knowing the best professionals in the field. He recruited many more new talented team members and ensured continued success for the company. 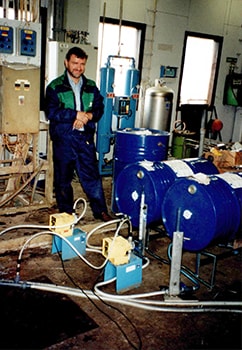 The second owner of KL-Lämpö, Pentti Edgren, has a strong background in the water treatment industry.

The next generation of water treatment

In the early 2010s, it was Pentti Edgren’s turn to retire. He sold the rest of the shares of KL-Lämpö’s parent company to his sons Olli, Juha and Saku. By then, all three of them had already established themselves in the company operations for 10 years, each in their own respective areas of competence.

The three brothers began to independently lead KL-Lämpö towards a future where export trade would be increasingly significant. Their visions gave the business a further boost.

An article in the regional newspaper about the change of generation in the company’s management.

From 2010 to the present, KL-Lämpö’s turnover has increased at a steady pace, and a growing number of talented professionals have joined the staff.

As the number of employees approached 40, new facilities were needed. In 2013, KL-Lämpö built new premises in Pirkkala that were designed to accommodate the growing production volumes and to meet the needs of their modern laboratory. Since then, the facilities have undergone two more extensions. In addition to the Pirkkala facility, KL-Lämpö has branches in Espoo and Kempele.

Besides the new premises, the company has systematically invested in improving working conditions and job satisfaction. This has paid off, as the average length that an employee works for the company is currently eight years. 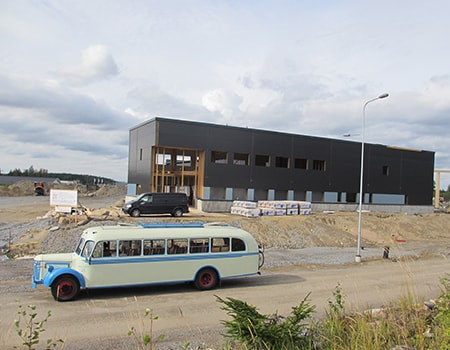 On the way to a new era – building new premises in Pirkkala in 2013. 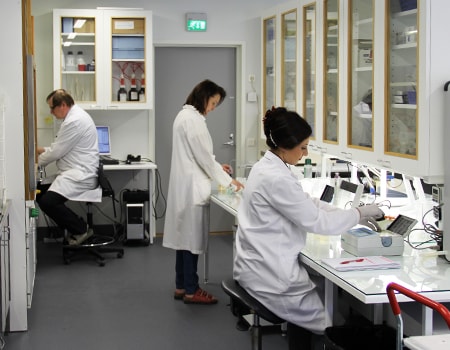 The number of analyses carried out in the laboratory has grown at a steady pace.

A customer-oriented company that keeps pace with the times

During the early 2010s, industrial clients began to outsource their maintenance services. This resulted in a need for completely new types of service companies that were responsible for the overall maintenance of industrial facilities. These companies could rely on KL-Lämpö’s expertise and support whenever they needed to solve problems related to water treatment and energy efficiency.

During the 2010s, the company has also kept pace with the times by co-operating with its clients and research institutes and customizing its services to each client’s needs.

One example of a customer-oriented business model that KL-Lämpö has introduced is the Kemlan service concept, which is designed to improve the energy efficiency of residential properties.

Clearly KL-Lämpö is doing something right, because the number of analyses, as well as the volume of production and turnover, have increased year after year during the past decade. In recognition of its business success, the company was awarded Pirkkala’s Enterprise of the Year in 2015.

During the 2010s, KL-Lämpö has expanded its export activities. Not only has the company launched its products and services in new markets, but it has also branched out to the field of wind turbine maintenance. KL-Lämpö has demonstrated its high level of expertise both domestically and internationally. The company belongs to the Cleantech Finland network, whose members are at the cutting edge of Finnish cleantech.

The company has expanded its services to include the maintenance of plate heat exchangers. 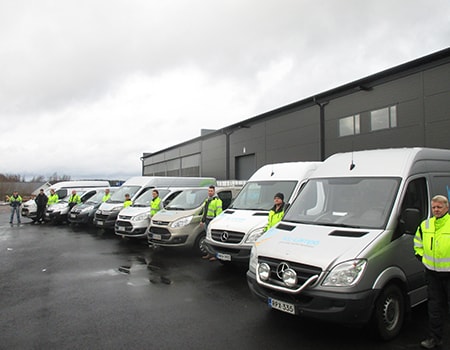 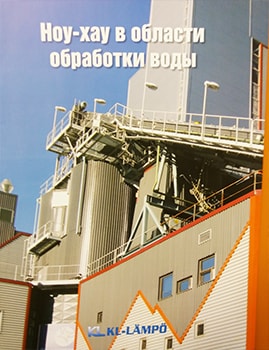 Today, KL-Lämpö is the largest Finnish company in its line of business and continues to grow and develop, while keeping in mind the old principle that the customer is always right. KL-Lämpö’s customer research demonstrates that the company works hard to earn the customers’ trust. By choosing KL-Lämpö, the customer can depend on a reliable partner both today and in the future.

The quality is guaranteed by a professional staff. 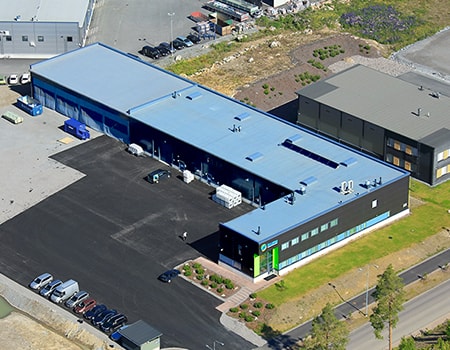 The premises have undergone two extensions since they were built in 2013.